Plan was 180 nautical miles and  36hrs, straight up the Irish sea, across the North Channel and up the Firth of Clyde – Non stop.  Forecast over the next 2 days was  sea state smooth/slight, winds 3-4 occasionally 5. weather fine, fog patches.

Scott arrived back on the boat on the evening of Monday 16th with a curry.  We set the alarm of 0300hrs to leave and with the aim of being just off our North stack waypoint (Holy Island, Anglesey) at 0400hrs. 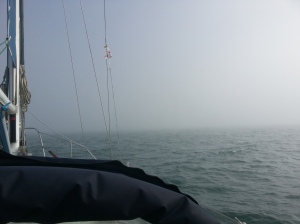 The first 18hrs of the journey were rather mundane with the exception of fog however we rattled along at 5 knots keeping a good lookout.   Nothing much happened, some dolphins turned up for about 10 minutes, we past a lot of shipping heading south and slowly the Isle of Man came into view some 15 miles off to starboard.  Later, to the west, we could start to see the tops of the mountains of Mourne.  As we neared the top of the Isle of Man, dusk came along, the lights of the NE coastal towns of Eire shone on our port side. Visibility was for this period good.

As we past Carlingford Loch, I spun a few dits about bandit country and then explained to Scott that I didn’t have any good memories of the locals be they from either side during the troubles.  Scott being a civvy all his life however did.  Accepting each others point of view we tucked into yet another boil in the bag of Lancashire hot-pot.  In hindsight, I should have got some beef stew and dumplings as I think these are a bit more tasty but the hot-pot was not that bad.  The chilli is however too salty.  While eating, we picked up Belfast coast guard and the weather forecast was now changing.  Irish sea F4-5, slight moderate, visibility good and very poor.  I assumed there was more fog on the way.

At about 0320hrs the forecast had changed again, F4-5, 6 in the North, moderate, viability good and very poor.  I was in the process of changing course at the time to cross the North Channel.  I had set the boat on a close reach and went down below to do a nav check etc when this forecast came in.  I not slating Belfast Coastguard, because the Coastguard service has seen many cuts and closures over the past 4 years and here they appeared to be covering what seemed to be a massive area from Carlingford loch to what it seemed most of the way up to Tiree, but they were just crap, their times were not regular and also at one point they appeared to have hired in Ian Paisley wannabe to  bark out the messages with fierce unintelligible conviction.

Scott went down below to get some rest.  The wind increased in strength and the sea started to build. I mad sure that I was clipped in to a strong point within the cockpit as the boat started to take on 2m waves coming in on the port-side bow.  I was off course being pulled Northwards.  The sea state rose to a steady 2.5m with the occasional breaking wave.  Scott came up and I promptly told him the best place is down below.  The sea required all my concentration and this was really the limit of the type of stuff I felt comfortable in.  Looking continuously over to port, trying to assess the next set of waves, I pulled the boat up wind then bore away to try and get back on track.

Then, it went all weird. I could suddenly sea a wave, one wave away, starting to develop a breaking crest that was getting bigger and bigger.  There was a pause and the wind seemed to die down, the wave face darkened up slightly and the crest started to tumble.  I remember saying “Oh shit” aloud as it towered up high above the bow, just as we were in the preceding trough.  I reckon it was a good 4m high. I slung the boat over to meet the wave head on and  then turned so we were climbing up the face at an angle of about 30 degrees.  The wave broke fully as we were near the crest, and to some extent we fell down the back side only to be met by a second similar wave and then a third.  I shouted “hold on” down below but didn’t have time to see where Scott was.  This shook me up for about half an hour afterwards as I constantly searched what area up wind I could see for more large waves.  About 0830hrs, I tuned East by South East as that would in theory slow things down a bit.  It worked and once we were in the lee of the Mull the sea-state dropped to a steady moderate.  Scott came up and I handed over the helm with strict instruction on what to do and what not to do.  I went below and fell asleep for 3hrs.

The result was blustery wind, steep waves with short wavelengths and sea mist.  As said earlier this was all new to me and the fact that there was no other vessel about said for itself that these were probably not the best conditions to be in.  However I was pleased with the boat and with our conduct.  You can’t teach these thing, you just have to put yourself out in theses conditions and cope with a bit of luck as well. The shift pattern worked very well.

By 1000hrs, everything had calmed down, we had past Ailsa Craig and were staring up the Firth with the East coast of Arran on our Port side.  As much canvas as permissible went up and we were getting an average of 6 knots which was great.  The weather improved to a North westerly force 4, sea state slight and brilliant sunshine.  Scott was crashed out below and we held our course no further. About 1930hrs we we tied up in the James Watt marina and set foot onto Scottish Soil.